What is “ionized water”?

The term is essentially meaningless. True, it is possible for water to contain dissolved ions (electrically-charged atoms or molecules), but that’s something else again. Almost all waters found in nature acquire ions such as calcium and bicarbonate as they come into contact with rocks and sediments. Even the purest rainwater contains some hydrogen- and bicarbonate ions that are formed when it picks up carbon dioxide in the atmosphere. 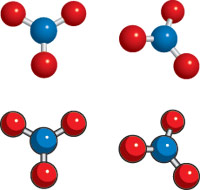 Pure water consists almost entirely of H2O molecules loosely bound in a network-like structure in which individual molecules are constantly changing partners. Water molecules exhibit a very slight tendency to dissociate (“ionize”) into hydrogen ions and hydroxide ions: H2O ; H+ + OH- but the extent of this reaction is severely limited by the fact that the reverse of this reaction is much more rapid, so that on the average, only about two out of every billion H2O molecules is dissociated. No electrical device or chemical additive is capable of increasing these ion concentrations in pure water above this very minute level which is so small that for most practical purposes pure water can be considered to be ion-free, as evidenced by the fact that it will not conduct an electric current.

Acidic and alkaline water, pH all water and all aqueous solutions contain both H+ and OH– ions. If the quantity of H+ exceeds that of the OH-, the water is said to be acidic. If there are more OH- ions than H+, the water is alkaline. Pure water, which contains equal numbers of both ions, is said to be neutral. Chemists express the degree of acidity or alkalinity on the pH scale which runs from about 0 to 14. Acidic solutions have pH values of less than 7, alkaline solutions more than 7. Pure water, being neutral, has a pH of exactly 7. Each unit on the pH scale represents a hundred-fold change in the ratio of the two kinds of ions; for example, if the pH is 8, there are 100 times as many OH- ions than H+ ions (that is, [H+] = 10-8, [OH-] = 10-6.) Whether a water is acidic or alkaline, it will always contain equal numbers of positive and negative electric charges.

Since alkaline water contains an excess of OH- ions, it must also contain some other kind of positive ion in addition to H+ in order to equalize the opposite charges. This extra positive ion is almost always a metal ion such as sodium, calcium or magnesium. Similarly, an acidic water must always contain negative ions in addition to OH-; the most common of these is bicarbonate HCO3-. This means that waters whose pH differs from 7 are never “pure” in the chemical sense.

“Ionized water” is one of many products and panaceas that the wonky-water wellness industry flogs onto the large segment of the general public that lacks the scientific background to distinguish scientific fact from pseudo scientific hype when the two are closely intertwined. What most of these treatment devices actually sell are grossly overpriced electrical devices that purport to produce “ionized” and alkaline water by the process of electrolysis.

In the end, it’s better to keep your money in your pocket before shelling out a lot of money on an ionizer.